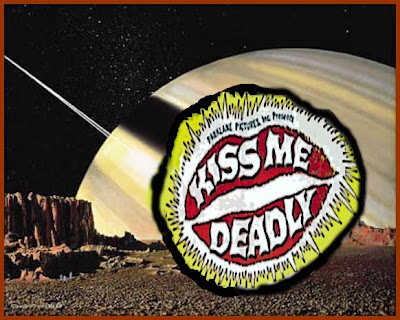 The Girl Hunters (1963)—
Or the Friends of Mickey Spillane

Mike Hammer: “Where are my clothes?”
Pat Chambers: “In the garbage, which is where you belong.”

“Trapped in the quicksands of
Titan...Caught up in a nightmare
of murder and intrigue!”

At the very beginning it says this is from "Colorama Features," but the movie's in black & white! Morons!

Mike Hammer (Mickey Spillane) is found drunk and passed out by a Titan cruiser on some asshole asteroid; he's taken to excessive drinking since the abduction of his girlfriend and secretary Velma, and is no good to himself or anyone else.

Given a second chance and a new license to carry his cannon-like .45 raygun by new-found friend and Corporation heavy Ricky the Rat (Lloyd Nolan) he sets out to find Velma and in the process meets the beautiful Laura Schnapps (Shirley Eaton) who he first sees in her bikini as she's getting a suntan on a floating dirigible raft adrift in the lazy lollygagging Rings of Saturn.

Eaton makes a good femme fatale—and has this really neat seduction scene with him in her dark submarine torpedo-tube apartment one night. Ricky the Rat puts Hammer on the trail of "The Dragon" (Love-lips Liberace) a Las Vegas killer who might be connected to Velma's disappearance as well.

The plot is difficult to follow, names are tossed out, and the viewer's job is to try and connect the dots. The pace is rather disjointed, directed by veteran John Waters, and Spillane, though he isn't a very good Mike Hammer, grows on you like mold on cheese—as the film heads into a surprisingly violent orgasm climax.

Spillane’s influence began to wane in the ‘60s—and this movie shows why. Mike Hammer was a precocious over-sexed Brooklyn teenager—but still a child of the postwar ‘40s and the Red Scare-dominated ‘50s. The tactics of a violent, pugnacious, vacuous, virile, juvenile delinquent, vigilante private eye grew less appealing to readers and writers in later decades.

Mickey Spillane should’ve stuck to his typewriter and Miller Lite—because his acting makes this movie simply awful. But it’s not just the bad acting, it’s everything—from the amateurish directing and Neanderthal script to the strident, cloying, annoying trumpet blasts that rise out of the soundtrack whenever a bedroom scene takes place.

There's absolutely nothing about this film that works. Everybody fawns over Mike Hammer the whole time—with the exception of the chicks and molls who are caught yawning while the camera is rolling.

That's your plot line. Trying not to laugh at this flick as a comedy—rather than a murder mystery or spy thriller. Forget the Goldfinger allusions—like the Odd Job-style bad guy with his boomerang killer hat. Shirley Eaton yawns her way through this fiasco flick—going on to stardom despite the bad publicity.

What is it about guys that can't act (and don’t know it)? Other bad actors—seem to glom onto them. So Spillane has several scenes with a real-life mutant Martian transvestite freak—that undoubtedly rank up there as some of the worst in the sci-fi movie special-effects of Hollywood history. And, therefore, of all time.

If you want something to do while watching this turkey, count the number of times Hammer plays with himself beneath his ratty trench coat. London Fog must have been embarrassed by the whole production.

As far as Mike Hammer movies and novels are concerned, stay away from Girl Hunters and sick flicks such as Kiss me Deadly—like all the respectable literary critics and academics do. They distain and simply despise pulp fiction—its excessive violence, preoccupation with sex, and conservative (some say reactionary) politics.

Yet these works undeniably have an audience—with an estimated 200 million copies of Spillane’s works in print. Nor can his popularity be misconstrued purely as a bourgeois low-brow crude artifact of so-called American popular culture—since in 1995 he was the fifth most filthy translated author in the world.

The real Mickey Spillane is the portrait of astute stoic moderation—usually a modest ten petite martinis for lunch, a modest family-oriented TV sitcom in the afternoon and then a brief dab of domestic violence in the evening before bedtime. All of which counters the stereotype of the fictional detective douchebag private investigator which has been imposed on Spillane by his uppity literary critics.

Actually Spillane is just a minor somewhat slick pulp fiction juvenile delinquent writer who never quite grew up. Previous to his Mike Hammer dayz and after a brief rather depressing stint at Kansas State Teachers College—he returned to New York and began writing comic books. Some of the titles he worked on were Captain Marvel, Captain America, Plastic Man and Prince Namor.

According to The Oxford Companion to Crime and Mystery Writing—Spillane’s notorious speed in composition made I, the Jury, Kiss Me, Deadly and The Girl Hunters possible in one extended sitting on the throne of his South Carolina outhouse. What concentration—what sheer unadulterated panache!!!

Like Phillip K. Dick, Spillane became mired in troublesome religiosity for a decade or two—but saved himself through greed, royalty checks and lucrative TV Miller beer advertisements. “Why write if you don’t need the money?” Spillane said, explaining the hiatus in his writing career.

Unlike PKD, Spillane didn’t seem particularly plagued with religious doubts or dogma—since his later novels continued to have Hammer drinking, smoking, engaging in casual sex and resorting to the usual gauche violence when dealing with criminals, deadly transvestites and flouncy femmes fatales.

Despite Spillane’s commercial success, he’s received rather niggardly, paltry lit crit attention—compared with the exalted triumvirate of Hammett, Chandler and Macdonald portrayed by TPTB as true authentic hard-boiled writers who merit literary study. Some critics have even dished Spillane as representing—“the perversion of the great American novel.”

Such hard-boiled, jealous, vicious critics simply detest Hammer’s solipsistic belief in himself, his unerring confidence, his intensely haughty lonely give-a-fuck attitude toward the world. They say Spillane has queered the whodunit’s implicit endorsement of the system of justice and the hard-boiled novelist’s explicit sense of defending upstanding morality.

Such critics have pooh-poohed Spillane’s pulp fiction comic-book imagination—as dictatorial dystopian dribblings, putrid propaganda for the police state. They say that Hammer could be just as well be one of the thugs and hoodlums of Spillane’s detective fictions—demanding that surely Spillane should apologize for his neo-noir bad attitude.

Some snooty critics have even detected a brutal homophobic fear of women—like the final killing of the naked seductive transvestite, Charlotte Manning, in I, the Jury. They say that Hammer isn’t knightly enough to walk the mean streets of America—like Chandler’s prim and proper Marlowe the poor put-upon private eye of the Bernardino No Tell Motel and the LA haunts of the rich and famous.

One critic even turns on Spillane’s readers themselves like some vicious junkyard dog snarling while guarding the high brow garbage dump of the Rich and Famous by saying that—“Spillane’s popularity is often attributed to the unregenerate depravity and stupidity of the mass reading public.”

Such a specter of “mindless millions of minions and cretins slobbering idiotically as Mike Hammer bitch-slaps and pistol-whips various louche LA perverts, queers, faggots, lesbians, hoodlums, criminals and various other vile villains and villainesses” makes me shudder in fear and self-loathing—for about a minute.

Yawn. Ho-hum. What’s a pulp fiction queen to do? But then I shrug—and pick up another Mickey Spillane paperback novel. Getting back again to the real business and pleasure—of enjoying a hard-boiled, classy Mike Hammer thriller.