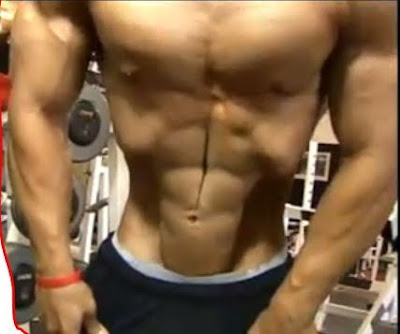 The Boy in the High Castle—Chapter Eight
Big Tuna

“When we come upon the sexual
in a place, context, or simply a
mode we don’t expect, the sexual
always frightens”—Samuel R. Delany

“I like that….” Denny panted when Kid was inside him. “It’s pretty good…” Lanya had the right idea: Talking was silly. He didn’t come in Denny’s ass, but in hers. Dhalgren (582)

Tagomi liked Spencer right away—the audition was successful. At first some shots of him posing—before an actress was called in. Tagomi had a contract already filled out—Spencer raised his eyebrows when he saw how much Tagomi offered him.

But Spencer Abendsen was different. What Tagomi liked and what turned him on was Spencer’s physique and unique build. He worked out at the gym, he was 18, and a real plus was his male endowments. But it was his “abs” that were especially captivating—his well-developed muscular abdominal muscles.

The audition for the girls and other male roles were held in the Captive Production studio. But Tagomi did special jobs in his office. And Spencer was special. Most videos Tagomi did used many girls. New girls.

And older stars looking to stay in the business—sometimes he used them, sometimes not. The Reikos and Eikos and Kelkos. Ries and Mies and Magas. Emis and Toshimis and Hiromis. Anybody Tagomi recognized he usually wouldn’t consider for the female lead.

Tagomi’s decisions were instinctual and expensive, but when they worked the sales could be spectacular. One look as Spencer in the nude convinced Tagomi that the kid was just what Tokyo craved. He prided himself on his ability for snap judgments—about who would sell and translate to the small screen.

The thing about Spencer was his young male anatomy. Seldom had Tagomi seen an American model with such a seductive hard stomach. It was long and slinky and the kid knew just how to flex it in front of the camera. It would make eyeballs ogle—the way his abs cleaved down his stomach like a pussy slit or an obscene uncut foreskin sliding back.

Tagomi sipped iced oolog tea and smoked Rising Sun filterless cigarettes as they prepared Spencer for his audition. His bee-stung pouty lips were just right—looking just right as the bored boy next door. He’d picked a fresh maguro—for her initiation into the sexual realm. Then gradually voyeuristically open it up to the shocked look on her face—when the first splat hit her face like that scene in his own Japanese remake, Bonsai Badboy.

He wanted Spencer to get a tongue-bath first though—to let the moviegoers see what everybody at the gym saw but couldn’t touch. Spencer’s cobra-like undulating deeply-slit abdominals hogging the screen. Shots like that won him the Best AV Director’s plaques handing all over his walls. It was like seeing a cobra in a basket rising up to greet the flute-lips of a seductive drooling sexy starlet, her lips all over Spencer’s well-lubricated physique.

Tagomi was picky. Even as he took a walk afterwards walking down busy Geary Boulevard on the way to a soba noodle shop he kept his eyes open—looking through passerby’s, shoppers, sweat-pants, mini-shorts, cruising for a potential first-rate tuna, somebody he wouldn’t hesitate approaching and introducing himself to. He always was an adult video-director—never acting like anything else.

“A young male star should know from the very beginning…” Tagomi insisted. “They may pretend to be disgusted, but few refuse my offers. If they’re broke and alone—that helps.”

Especially if they were insecure about their looks—young American males like Spencer. Naïve athletic types who’d never been propositioned—even though that was a rare thing in SF. Right then and there, he zeroed in on a choice goodlooking number—ducking through the pedestrians to get to him. No scout could match his track record—Tagomi was a genius.

Spencer was special but spaced-out. Tagomi had listened to his nephew opine about his friend—what a nice body he had, how goodlooking he was. His nephew’s taste in American males was to be admired—perhaps good taste ran in their family tree. But Tagomi was picky and hard to please—he knew his business and few AV Japanese directors were as good as him.

Tagomi was married to his work—and the I Ching. Whenever in a pinch, he consulted the Oracle. The Oracle was like the bent-over old lady at the sushi-joint—where he order his regular noodle dish each day. She referred to him as “senset”—master. Like the prominent poets or judo instructors. She knew all about his work—but had never seen any of his films. But anybody always sweating profusely as Tagomi and on the make for young flesh all the time—certainly deserved as much “senset” treatment as possible.