The Face of Wolfboy 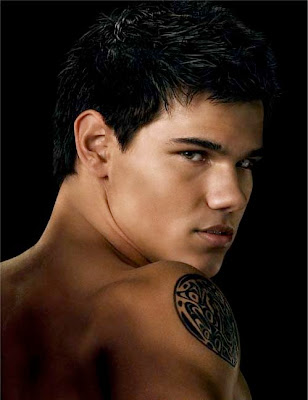 The Face of Wolfboy

“this deified face,
something sharper
than a mask is
looming…”
—Roland Barthes,
The Face of Garbo

Taylor Lautner belongs to that moment in cinema when the human face plunges audiences into deepest lycanthropic ecstasy, when one literally is lost in a human-werewolf image as one would in an updated Lon Chaney Jr. movie, The Wolfboy, when the face represents a kind of sullen state of shapeshifting flesh, the young male who can be neither reached nor renounced. Valentino caused suicides—giving rise to such mystical feelings of lunar perdition.

Taylor Lautner’s face is like Garbo’s face in Queen Christina—a cold rainy face both fragile and compact—the eyes black like strange wolf flesh, but not in the least human, the eyes alone are two faintly tremulous wounds. In spite of its extreme male beauty, this face, sculpted into something smooth and primitive, at once perfect and animal, comes to resemble the totem-like countenance of the Oregon coast rainforest, the young Indians living there.

The temptation of young wolfish beauty, so different than the puffy alcoholic face of Lon Chaney Jr. ogling at hard-to-get aloof Evelyn Ankers, verges on a half mask, archetypal half-boy half-wolf. Lautner offers a face and physique that’s half human creature, leaving no doubt in the audience that the undefined sexual nightmare of their deepest dreams, is cinematically real. A sort of teenage transvestism carries without pretense the superlative state of beauty that turns a boy into a wolf and a wolf into a man.

It’s not often that a Wolfboy consents to letting the crowd see the ominous maturing of his young male beauty—is he descending from heaven or rising up from hell? Either way doesn’t degrade the reality of his perfection—which is hardly intellectual or formal.

Such sullen moody sultry wolfishness never deteriorates—the way the nostrils curve and tremble in a kind of involuntary half-human giving-up of pure adolescent animality like 18-year-old Lucien Sénémaud in the woods in Jean Genet’s Un Chant d’Amour. Is the deified face of Lucien, seen from the neck above, the erect nostrils and arch of eyebrows, isn’t it haughty existential male beauty yielding itself to Genet’s lips down below, the archetypal porno movie enshrining forever the iconographic images to come, to see the look on Sénémaud’s face in the woods, as Jean Genet goes down on him, giving us the clarity of the lyric Wolfboy flesh, as he makes love to the handsome young succulent Fisherman of Le Suquet.

Posted by pugetopolis at 6:53 AM