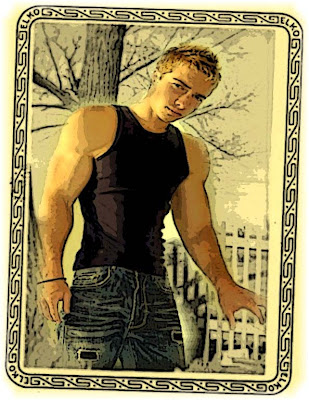 I first met both Professor John Francis Shade and Professor Charles Kinbote during my freshman year at Wordsmith College in New Wye (1958-1959). I had both Shade and Kinbote as English professors—and they had me.

The reason I say I had both Shade and Kinbote (as professors at Wordsmith) and they had me is rather simple—Professor Shade and Professor Kinbote were one and the same person. Professor Shade was the one-and-only Queen of Zembla herself—Miss Kinbote was simply a lady in waiting in the court of Shade’s gay imagination.

There’s been a great deal of conjecture and academic pussy-footing around going on lately about Professor John Francis Shade and his lover Charles Kinbote. It’s been a rather coquettish dialog since academe is still somewhat full of the usual “closet-cases”—both well-meaning milquetoast passive types as well as the more aggressive vicious self-hating homophobic variety. Whether sharks or bottom fish—closet cases can be so tiring.

To say nothing of the stultifying Neo-Zemblan zeitgeist that even now ominously overlays the geography of our imagination—all the way from supposedly sophisticated Paris and Berlin to out-of-the way places like New Wye with its innocent little Wordsmith College nestled there in the quaint foothills of primitive backward Appalachia.

But the truth of the matter is that Professor Shade was my lover during my freshman year at Wordsmith College and I got to know him in ways that perhaps would make his colleagues, his wife, his daughter as well as the reader blush with shame—and yet perhaps even they might then begrudgingly nod their heads knowingly with a certain sense of “pale” recognition.

What if Shade were indeed gay—and Vlad Shadow his young lover? What if we went for long drives in the mountains—with a young Zemblan chauffeur behind the wheel? What if we stayed up late at night in his dumpy mansion—Shade reading me in Russian the hilarious story of Gogol’s Nose? What if we played Marlene Dietrich records in the background—smoking a cigarette in bed afterwards?

What if Vladimir and Sergey were lovers—two handsome young aristocrats? One with a stammer late at night—the other pouting and sulking in bed all day? All of Uncle Ruka’s fortune down the drain—the family jewels, the millions of rubles, the wealthy estates. What was it like to be in Paris back then—Nijinsky dancing nude in the moonlight? Sergey, Tchelitchev and his lover—painting sets for Diaghilev and designing the future?

It’s difficult perhaps impossible to realize today in a supposedly more enlightened post-Stonewall period that New Wye back in the Fifties was a very difficult and dystopian time for homosexuals—especially homosexuals in the cloistered hallways and twisted ivory towers of Wordsmith College. The fear and self-loathing prevalent back then made things difficult for John Shade—but hasn’t it always been that way?
.
Being gay back then meant one thing—Shade needed to burn with a “pale fire.” It was subversive—it had to be that way. I suppose that’s why Shade called his poem “Pale Fire”—inside him burned something tiny, blue, almost invisible. It glowed in the dark like a pilot-light—hiding from the world like Botticelli Venus inside her pale pink mother-of-pearl shell. He hid himself within himself—neither his colleagues nor his family knew the truth. How pale they’d get—if they saw Shade and Shadow in bed together.

After all wasn’t Professor Shade supposedly a happily married man with a loving wife and wonderful daughter—a fairly normal American heterosexual full professor with everything going for him? Wasn’t Shade confident, easy-going and typically straight-forward—as different from swishy effeminate Professor Kinbote as night and day?

Back then it was Don’t Ask Don’t Tell even more than today—especially if you wanted tenure and wanted to avoid the McCarthy witch-hunts rampaging across the land. Our relative freedom today to debate gay marriage and even talk about GLBT issues freely without fear of reprisals and death-threats pales in comparison to the rampant Cold War paranoia and ignorant homophobia back in the Fifties. Hence, the Gradus death-theme in the foreword, commentary and index of the original version of “Pale Fire.”

Back then in the Fifties it was truly an evil Garden of Forked Paths for a tortured gay poet like Shade to even contemplate an alternate sexuality to the norm—if there is such a thing as that. Was Frost a normal poet—was Dante a normal poet? The question of the various shades of Shade’s gay imagination and how successfully he adumbrated it, appropriated it, commandeered it, disguised it, played games with it, discombobulated it and put it all adroitly back together again is how he composed Pale Fire—but how did he do it?

This cool, hidden, slumbering, secretive “pale fire” of John Francis Shade—does the poem give the perceptive reader a chance to appreciate the nuances and perhaps even banal bourgeois attempts of a mid-twentieth century gay man to deploy a somewhat shallow deconstruction of Desire and Denial—finding a new identity within himself through the magic of the gay muse?

As the reader will perhaps discover, Pale Fire is more than a mere “low-Romantic” autobiographical poem—with its telling narrative of unrequited homosexual love, newfound gay romance and late-blooming bildungsroman self-awareness. Or was that it—just another miserable failure?

Beyond that though—whatever it was and wherever it was going and however it ended up on my desk tonight—there is still a story-within-a-story, a gay doubling effect worthy of a Poe or James, a gay doppelganger in the wings, a strange house of mirrors waiting for the reader to get lost in—I know I did and still do. Even tonight as I go over this rough draft—I feel a different kind of draft through my New Wye den…

The poem, the foreword, the commentary, the index—all of these Shadian masks are posing as a man in search of himself. A man with a playful imagination yet plagued with self-doubt—perhaps like the writer Nabokov himself struggling through his many novels with his own shade and shadow—his tragic gay younger brother Sergey Vladimirovich Nabokov who died in a Nazi concentration camp in Hamburg shortly before the end of the war.

“For various reasons I find it inordinately hard to speak about my other brother. He is a mere shadow in the background of my richest and most detailed recollections. As a child, I was rowdy, adventurous and something of a bully. He was quiet and listless, and spent much more time with our mentors than I. At ten, began his interest in music, and thenceforth he took innumerable lessons, went to concerts with our father, and spent hours on end playing snatches of operas, on an upstairs piano well within earshot. I would creep up behind and prod him in the ribs—a miserable memory.” (Speak, Memory)

Sergey the hushed family secret—never talked about in public yet constantly discussed amongst his commiserating relatives, shoved into the back of their minds, stuffed into the family closet. As if Sergey’s lifestyle were worse than the revolution itself—worse than the tragic exile from St. Petersburg.

There were long conversations between Nabokov and his father, Vladimir Dmitrievich, about Sergey—the usual shrug and mock-dismay that “I simply can’t understand it—his homosexuality, his love of operas, his gay Parisian friends, his Austrian lover, etc.” Both of them knowing all too well about the flamboyant gay proclivities of their wealthy Uncle “Ruka” Vasiliy Ivanovich Rukavishnikov—who ended up bequeathing young Vladimir a million dollars, a country estate and two thousand acres of wilderness and peatbog.

Years later Nabokov’s troubled inner dialog about Sergey, Uncle Ruka and the problem of gay consciousness would still be going on—coming out in The Real Life of Sebastian Knight, Ada, Lolita, as well as other novels and Speak, Memory: An Autobiography Revisited. But especially within the pages of Pale Fire—with the endless Zemblan dialog between the poem and the labyrinthine commentary going on and on…

All of this runs through my mind tonight in my study—just as it ran through Shade’s mind, Nabokov’s mind, Kinbote’s mind, Sybil and Hazel’s mind. Isn't it all one mind with the same delicate thread of “pale fire” running through it—the “pale fire” of gay love, the heart in conflict with itself and the struggles of the homosexual imagination?

“But then, who are you?” the reader might ask. Am I, Vlad Shadow, not simply the palest shade of all—the palest inkling of the pale fire that courses through the text? Am I not simply another mask, another fictional nuance of Professor Shade’s gay dialogic imagination? Was I really his student at Wordsmith College back then in the Fifties—was I actually his lover that fateful academic year of 1958-1959 in New Wye?

I’ll let the reader answer those questions and all the other questions that are moiling about inside Shade’s poem. And then I’m sure there will be even more questions, laments, conjectures and criticism about the new version of Shade’s poem I presented for the “readerly imagination” to examine and now this lowly failure of a Postscript.

But the point I’d like to make at the close of this Postscript is that it was a “writerly imagination” that first spoke through me during the composition of this new version of “Pale Fire.” And that even though the somewhat meandering complexities of this new Postscript—as well as perhaps the somewhat overly-postlush footnotes of my loche Zemblan Commentary—seem to divagate and ramble on forever without any rhyme (in heroic couplets) or reason (what’s that?)—that there is indeed a contrapuntal theme to this new poem and commentary—that there’s a texture to its topsy-turvy coincidences, a web of sense to its seemingly flimsy nonsense, a kind of correlated pattern to its twisted shadow-play, a sullen golden Ariadnian thread of flexed artistry moving through its meandering labyrinthine text, playing a subtle game of words and worlds—promoting pawns to ivory unicorns and ebon fauns?

And yet I don’t want to bore or provoke the reader’s expectations beyond Charles Kinbote’s queenly ornamentation, beyond John Shade’s exquisite poetic wordplay—or attempt to provide any kind of quick solution to any lit crit problem or come up with any spiffy lube-job denouement like the one by the handsome boy at the Wordsmith Jiffy-Lube, for example, who maintained Shade’s dumpy Mercedes and who Shade was very fond of there in New Wye. After all, Professor Shade was no angel—the reader probably knew that from the very beginning. No more than Professor Kinbote was an angel—other than a fallen one.

Posted by pugetopolis at 3:14 AM