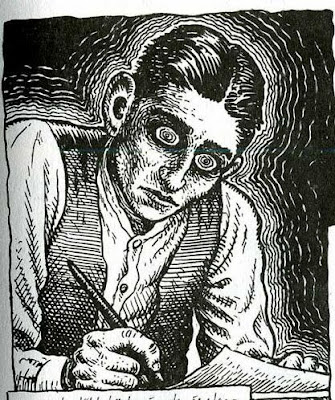 What does it mean to be Ygor?

It means to live—a kind of living death. Ygor knows his fate isn’t simple—but he has a talent for portraying his nightmare-like inner life. He does this much better in Son of Frankenstein rather than Dracula.

Ygor is still living in a gloomy dumpy castle—with secret passageways and crypts below ground near some fuming hellish sulfur pits. There’s an old Count Frankenstein laboratory down there—and a special hideaway for the Creature.

Ygor asks the Baron’s son for help—to revive his friend from a deep monster coma. He got out one night during a lightening storm and got zapped by a lightening bolt right into his neck-bolts. What a orgasmic thrill it was—but it was too much even for such a huge terrible monster. He’d been half-dead half-alive ever since then—with Ygor worrying about him like an old woman.

Frankenstein’s monster tries to please Ygor—but he doesn’t have any energy left. Lightening is his mother—and he needs another shot of joy juice. Basil Rathbone struggles with his guilty conscience—but is persuaded to move forward with his father’s daring experiments. Ygor hangs out in the background—like a jealous lover. He knows he’s just an old aging hunchback—with a bone in his throat from a mishandled hanging.

Ygor wants his big brute lover-boy back—in fact in another episode in The House of Frankenstein Ygor wants his brain to be transplanted into the Creature so that he can escape his crippled body and have some fun around the joint.

But what is it like to be a Monster? Monsterhood is an exciting, wonderful livelihood—terrorizing the countryside and getting revenge for Ygor on the Burgomaster and his cronies. Ygor plays his crummy little flute—and there’s the Monster played by Boris Karloff mostly in a reclining position. But he manages to get it up and move around—thanks to Basil Rathbone and all that art deco electronics down below the castle. One by one Boris knocks off each petty official in Frankensteinville—all the creeps that had poor Ygor hung by the neck.

What’s it like to be a Monster—stitched together like a rag-doll with human arms and legs and all those squishy organs inside? To be reborn and not know who you are—except that your body is constantly struggling against itself and your brain belongs to a serial killer from Budapest? Nature embraces you with dubious binding spirits—and surely it’s the devil in disguise that peers at you from the mirror?
.
Being a Monster must be like the Living Dead—none of your organs no longer knows anything about where they came from or who once enjoyed this or that throbbing once-alive organ? It must be truly a bonfire of vanities—your whole body craving enjoyment but discombobulated so much that you don’t know what’s up or what’s down?

Kafka says that that’s what a writer constantly experiences—he dies and does not live like normal human beings. He’s a monster—an ungeheueres Ungeiziefer!!! A monstrous vermin—a creature that has no home. An unclean animal—unsuited for sacrifice & without a place in God’s order.

To be a writer and sacrifice yourself to the demands of literature—what does it mean? It doesn’t lead necessarily to happiness and expansive joy. More than likely—it leads to a kind of living death. A writer is a kind of living dead creature—for whom the living must flee and who’s thus condemned to homelessness.

Like tortured Gregor Samsa in The Metamorphosis—a writer is not-this and not-that. He’s not really a cockroach—he’s really Kafka in drag. Kafka the writer—playing the game of dead doppelganger. The double who came in from the cold—the man who wasn’t there.

Why does a writer write—surely not just for enjoyment? Who would enjoy writing or living The Metamorphosis—if you didn’t really have to? According to Kafka, writing for the writer is only suffering—“through which he releases himself for further suffering.” Who would want to put himself or herself—through such endless condemned irreparable estrangement? Surely not you or me? Surely not Ygor or the Monster—or the hoity-toity Basil Rathbone? It seems so counter-intuitive—to do business this way.

It’s just a story some say—The Metamorphosis is just a short story, a game, a silly little parody, a throwaway dystopian joke. But Kafka took it seriously—he survives the death of Gregor Samsa. It helps him contemplate his own death—and surviving Samsa’s death prepares him for new deaths and survivals.

Kafka dies a lot—the clarity of the deaths are usually pretty successful. He ransoms himself story by story—novel by novel. He pays himself his own royalties—and gambles away the rest of his life. Did he know he’d die of TB—at the early age of 41? His whole writing career seems to be—like a rehearsal for his funeral. “All my life I have been dead, and now I shall really die.” He ends up like Samsa under a couch—nothing but a bag of bones & dust.

Is writing a rehearsal for something else—is it like getting rid of one estrangement and replacing it with another? Taking on one alienation—and playing it out with words and performance art? Late capitalism seems to be coming to a rather inglorious skanky end—full of Ponzi schemes and economic sleight-of-hands greedy goblins. Goblins, goons, trolls and thugs—under the bridge in Nabokov’s Bend Sinister. Tyrants like Paduk proliferate like flies—and can be bought for a dime a dozen. Political estrangement and alienation—seem to trump just about everything. What would Kafka—write about us today?