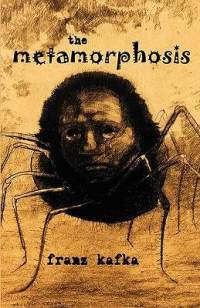 “The dream reveals the reality,
which conception lags behind.
That is the horror of life—the
terror of art.”—Franz Kafka,
Conversations with Kafka,
ed. Gustav Janouch, New
Directions, 1969

It’s hard being a cockroach. But that’s what happened to me. I woke up in the morning in bed—it was just awful. At first I thought I was still just dreaming—surely it wasn’t true. Surely I wasn’t a monstrous Cockroach!!!
.
Surely it was just a Nightmare—it was just another unsettling dream? Surely I was still a man—just a man simply dreaming I was a Cockroach? Surely I wasn’t really a Cockroach—dreaming I was a man? Surely not that. Surely it was just a freakishly lucid daydream—maybe I’d caught a fever at work? After all, I was a Wal-Mart salesperson—surely I’d caught a “bug” from the creepy crowds. Excuse me, a germ from one of those flea-bag cheap customers?

I squeezed my eyes tightly—but they wouldn’t close. For some reason, I didn’t have any eyelids anymore. My eyes were on the sides of my head—instead of in front. I couldn’t see the ceiling—only the faded bedroom wallpaper with puke-pink roses and ugly ogling begonias.

“What’s happened to me?” I said to myself. This was simply terrible—it was a Nightmare come true. I couldn’t wake up—I seemed to be doomed to be a lousy crummy Cockroach. Thank goodness I’d locked my bedroom door—people were already waking up. First mother knocked on the door—reminding me to get up and have breakfast. Then my father pounding on the door—to wake me up and get me going to the office. Both insisted I get up right away and go to work—after all I supported the family as a Wal-Mart salesman. I was the sole support for my lovely family—they depended on me to pay the bills.

I’m being facetious, of course—they weren’t really people. They were actually Insects—disguised as people. They were clever at it—somehow magically metamorphosing themselves into People. But they were really Insectoid Creatures—Pod People in Disguise. So was I—but we all kept it secret. How else can human beings survive—in such a Cockroach World? Let’s face it—each family is a Termite Colony. A bee hive of poshlust primitive Breeders—bent on one thing. Doing what Breeders do best—insanely insouciantly turning the world into one big Cockroach Factory.

But something awful had happened to me—I’d lost the Grand Illusion of being Human. For some strange reason, the mysterious Veil of Creationism had been ripped asunder—revealing what actually was inside each and every one of us. A Cockroach. Was it bad karma or de-evolution that had done this horrible thing to me? Lying on my back—a carapace as hard as armor plating? My pitiful scrawny little legs—wiggling helplessly in bed? It was just awful—being a Cockroach in my own bed in my own room in my own home. A shudder of insectoid déjà vu went through me—my so-called monkey-brains had betrayed me. Traded me in on something—much more ancient and insectoid.

Pretty soon the Health-Insurance Inspector was pounding on my bedroom door. He threatened to cut off my healthcare benefits if I didn’t get up and go to work. After all, half of what I earned went to support the insurance racket—all the administrators, salesmen and secretaries. Plus there was all the other insurance companies—house insurance, car insurance, life insurance, death insurance and fart insurance. As well as mortgage insurance and funeral insurance. It quickly all added up—until I was always in the hole and owed everybody money.

I was shocked when I tried to respond to all the people pounding on my bedroom door. It wasn’t my normal voice—instead it came out as a nervous, insistent, distressed chirping sound like a cricket. It badly garbled my words—it was my new Cockroach syntax and semantics. I loudly cleared my throat—trying to give the impression to the people outside the door that I had a bone in my throat.

What was I supposed to do—spread my wings and fly away? Cockroaches could fly—maybe so could I? I tried to flip on my side somewhat gracefully—but rolled out of bed and flopped on the floor instead. I was totally shocked to see under my bed—my supposedly long-dead younger brother who’d disappeared last year. He yawned at me and told me the Awful Truth—“Now you know.” For he too had been metamorphosed into a Cockroach—hiding away under my bed for all this time.

“You’ll get used to it,” he said. “Just keep the door locked and ignore the rest of Cockroachville. Sooner or later, they’ll give up and leave us alone. They’ll slide food under the door every once in awhile—and pretend we don’t exist. It runs in the family, dontchaknow. Metamorphoses, that is. Once you’ve gone Cockroach—there’s no turning back. I’ll show you how to sneak out at night—and raid the Refrigerator.”

Next the doorbell downstairs rang—it was the office manager. He demanded to know why I didn’t show up for work on time. He joined my family knocking insistently at my bedroom door—all of them in a state of panic and distress. The manager threatened me with my job at Wal-Mart—after all the economy was in the pits. People were losing their jobs right and left. And I’d be the next to go—if I didn’t hurry up and get to work. The manager even tried to peer through the keyhole—suspecting something suspicious going on inside my bedroom. After all, what was all that scratching sound going on inside there—and all that chirping coming and going?

Mother Dearest starting sobbing and crying—“There’s
something wrong with my Little Son in there. Surely he’s ill or sick and dying? He always gets to work on time—we’re just torturing him if he’s not feeling well. Then my father agreed with her—shouting “Quick! Get a locksmith! There’s dying animal in there—I can hear it inside my son’s bedroom. All that insane insect jibber-jabbering—it just doesn’t sound like him at all!!!”

I managed to somehow slide my Cockroach body—up the side of my chest of drawers, then along the wall, over to the locked door. My little Cockroach leg pads were exuding a sticky green substance along the floor. It stunk with a sickening skunk smell. It smelled like a strange combination of sweet licorice and rotten fish. And yet my new Cockroach nostrils quivered in almost orgasmic delight—at this new oozing smell of stinky Cockroach Ode de Cologne.

I finally got to the door but had no fingers to turn the doorknob or turn the key that locked the door. So I bent down and used my jaw—puncturing my tender palate painfully so that a black oily fluid oozed down my lips onto the floor. It hurt awfully bad, but somehow I managed to unlock the door—and show them the real me. The first one to see me was the busy-body Manager—who backed away in shock and disgust. Gone was his office manager braggadocio and Wal-Mart bourgeois hauteur. He vomited over the stairwell railing—looking back at my pitifully sad situation.

Mommy Dearest fainted in the hallway—while my father clenched his teeth and waved his hairy fist at me. But then uncertainly he looked at the manager and then his wife—finally breaking down in sobbing tears. Not knowing what to do—or what to say.

“Well,” I said, rather calmly. “Let me get dressed after a nice shower and shave—and then I’ll be off to work, dontchaknow. Business is business—and I’m just fine. Who needs one of those pesky reasonable accommodations? I’m not a cripple or handicapped person!!! Just wait and see—I’ll be back to work in a jiffy!!! I’m more than grateful for my job at Wal-Mart—just give me a decent chance!!! I’m not a “cocky” Cockroach—I’m just your normal grateful run-of-the-mill Top-Notch Salesman!!! My condition surely won’t hurt sales—gimme a chance, you’ll see!!!”

Holding onto the doorknob with one of my twitching antennae—I pleaded with the Manager who was slowly backing down the staircase. Unfortunately, I tripped over my Mother who’d fainted in the hallway. I fell on the floor—face to face with my poor Mommy Dearest. Suddenly she woke up—and jumped to her feet. She started screaming—“Help!!! Help!! For Gawd’s Sake!!!” She went running into the kitchen—knocking over a pot of coffee running down her leg. She screamed bloody murder—staring back at me.

“But Mother, dearest Mother”—I chirped sadly to her. “Don’t you recognize your poor son—down here on the floor?” But it didn’t do any good—the Manager was already creeping backwards very slowly down the staircase. His chin was on the banister—taking a last look back at me. I scuttled after him—I had a running start. My new Cockroach legs were perfect—for scuttling on slick hallways and linoleum floors.

I had to detain the Manager—and explain my Metamorphosis to him. I didn’t want to lose my job—my family needed the money. The Manager looked at me as if he’d been suspecting the worst to happen—easing his way backwards down the stairwell to get away from me. Suddenly he lost his nerve—and turned around running pell-mell down the stairwell. He’d seen enough—to scare the shit out of him. There went my cushy job—at Wal-Mart!

My father was simply frightened to death of me—brandishing a butcher knife at me & trying to force me back into my bedroom. My hysterical mother threw open the kitchen window—and plunged 3 stories down into the dark alley below. Luckily she fell on top of her neighbor emptying her garbage—breaking her fall but breaking the other old lady’s neck. Suddenly everything grew silent—the ratty old worn-out curtains in the kitchen were fluttering out the window in the breeze.

I could see it was going to be rough times ahead for me—me and my miserable Cockroach existence. After all my years as a successful up-and-coming Wal-Mart automobile and tires salesperson. But now I could barely manage to scuttle my way back to my room—sliding sideways through the doorway and closing the door with one of my gimpy legs. It was just awful. Metamorphosis wasn’t for pansies—that’s for sure. I was simply exhausted by—all that human angst and desperate despair out there. I collapsed immediately on the floor—trying to catch my poor Cockroach breath.

“Told you so,” my young Cockroach brother said—scolding me for making such a family scene. “You’ve really blown our cover now, big time baby,” he said.
Posted by pugetopolis at 1:06 AM