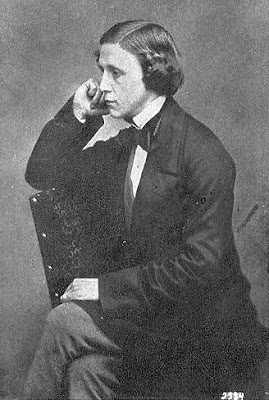 The Banker’s Fate
—for Lewis Carroll

But suddenly a Bandersnatch swiftly flew near—
Snatching the amazed Banker shrieking in fear
He offered it a large discount—offering it a check
Worth $1,000,000 even though it would bounce

The Bandersnatch then went after the others—
The Baker, the Beaver and the Barrister too
It was then the Bellman called for a retreat—
“We’ve been snarked," he said tolling his bell.

The Banker’s face was a frightful thing to see—
Usually as happy as any Mr. Green could be
But now black in the face like the depths of hell—
Losing any likeness to Bankers and Tellers

Down on his knees, the Banker went Boojum—
Starting to chant the most mimsiest hocum
Proving his utter insanity with lewd inanity—
Rolling dice and prognosticating the future

“Leave the Banker here—it’s too late, too late,”—
The Barrister exclaimed in a fitful fright
“We’ve wasted the day—quick without delay!!!
Or we sha’nt catch that Snarke this day!!!
Posted by pugetopolis at 9:48 PM