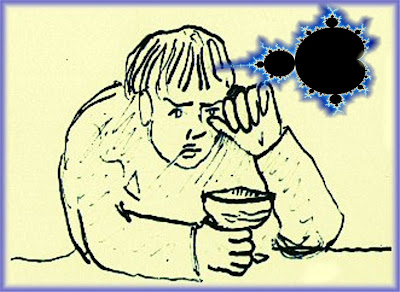 “My belly and my neck
are bent, a cheap pipe
in my teeth”
—Arthur Rimbaud,
Evening Prayer

“The French found the
prose poem to be an
ideal device for the
dematerialization of
writing per se.
—Ron Silliman,
“From the New Sentence,”
The American Tree

Igneous embers down by the docks. Flaking dark palaces and unprecedented disasters—all this from a vain frightened kid prodigy’s point of view, tangled up in malice and the arrogant arts of lying. My pipe and the night of a thousand blue stars—all the approaching evangelical campaigns to reform me—hissing down by the fractal Seine like waves like sails like surf on the Mandelbrot shore. So much for my badly conceived bateau ivre—all the ingredients of mystery and prayer flooding the drunken boat from start to finish. All I had was my beached heart and drenched soul—and my clay pipe opening up into another trance. A virginal toke each time—followed by all the crimes of love that go into becoming the Other. My hands empty when I needed a toke most of all. Even so—surely the little pipe must have enjoyed some of the tours of the most heavenly palaces I took him to. A match in my hand—brandishing the pipe as my pen. My bottom rosy as the dawn as Verlaine would say—my voice deep and tender as the new moon, sizzling & snapping ecstatically like a Las Vegas neon crescent sign high over the Liberace Museum. The moon like a rich lady—throwing down rays onto my tattered rags, round her neck a necklace of gone Hong Kong pearls. That’s how I found my lost pipe—pearly moonbeam key to my adolescent imagination. Smoldering under my bed—glowing gold earthy clay pipe, hidden & resigned to smoking opium with me amongst fading Ecbatane—handsome demons and devilish dancing adolescents. Littering the floor with the Seven sins—and all the five delirious senses. This modest pipe thought I was too uncouth—my appetites for promenaient wines in pink crystals. My dancing to the sounds of gay epithalamium choirs—unfolding like waves upon waves along sad lonely seashores. The pipe knew I was a Bad Angel—sixteen years old. Laurel-leaved idly on the fringes of dreams, fire and tears turning the ground into quicksand. In vain my pipe resisted my celebration of the flesh—Verlaine’s pleadings, his discouraging self-flagellations, his insistent desire to be my masseuse, his immortal and terrible despairs when I said no. “Oh, c’mon, Paul, leave me alone!” Especially after a tender fuck—the pipe trying desperately to escape from me with less than agile gestures, leaving any further intolerable shamelessness. The taverns, the readings, the soirees with French ignoramuses—it never failed to amaze the pipe how much trouble went into making one single lousy poet. The pipe was an old-fashioned pipe—used to tobacco and telling stories late at night. The more bourgeois the story—the more comforting the tale the pipe told about life in the country. But who would want to be the clay pipe of a young madman poet—a young arrogant hustler farmboy from the primitive wheatfields of the Ardennes provinces? My head full of Latin extravagant fantasies—pretending I was a voyant on the verge of some great Voyage? This was all too much for the modest little clay pipe—I was too haughty and too fancy. With the palace silk and gold of me. It was winter—wet drizzle and blackened by smoke. The pipe began to see me for who I was—a poor young wandering unloved scoundrel, a traveling little tramp always scribbling on paper, clothes sticking damp to my cold shoulders. My pipe wanted tobacco—and a long undisturbed smoke. It wasn’t used to Illuminations—dreams falling thru iron grates in the cold morning. If only that pipe could talk—it would tell long rambling stories about—all those long evenings Verlaine and I spent in The Black Cat Café. After I got off the train earlier—it was those evenings Verlaine and I spent in his wife’s bed—when I first got into town, smoking, gazing at the ceiling, while Verlaine did me. No wonder my pipe hid from me—it wanted to hide from shame in a little world of its own. But then my hashish habit began getting to him—each toke smelling like dark rooms with leather furniture and lean black cats luxuriating in my lap. And who in the world was this mousy maid Paul Verlaine—always fussing over me, solemn as an undertaker, sickeningly subservient like a slave in his total devotion to me? The pipe had never seen anything like it—but I just smiled and let Verlaine do me. What illuminations the pipe gave me—me becoming the pipe and the pipe becoming me. It was the pipe smoking me—rather than the other way around. It smoked and inhaled me—along with the cracked windows looking down toward the London docks and warehouses. The Thames sluggishly oozing down toward the sea—taking my life away from me. Last night I found my pipe—it was hiding from me. It didn’t want to do hash anymore—nor dream about my boyish Ardennes bateau ivre fantasies. Such an earnest pipe—it wanted only a tired old serious man who took long undisturbed smokes by the fire at night. The pipe didn’t expect to be smoked by an abandoned adolescent tyrant—a young voyant with thoughts of great books to be done, written in haste, illustrated by tall London windows drenched in rain. At first the pipe liked me—snuggly all wrapped-up in my pocket. But then…
Posted by pugetopolis at 8:12 AM