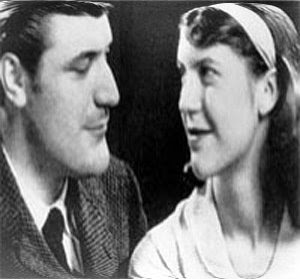 “There is a panther
stalks me down:
One day I'll have
my death of him."
—Sylvia Plath, “Pursuit”

She wanted me—not the vain, selfish boy
From Yorkshire—but rather the big, dark,
Hunky man—good at lovemaking today
Tomorrow—all morning and evening

No indolent—procrastinations
No yawning stares—no unrequited love
No distracting thoughts—or wondering why
Only making it, doing it—all the way home

The Thought-Cat
—for Ted Hughes

The Suicide Cult
—for Frieda Hughes

Have you ever—had the feeling
In a curious way—that what you’re
Writing is written—posthumously?

Frieda Hughes objects to Ariel and her mother’s life and poems being filmed or fictionalized—but what about Plath’s poems being echoed by other poets?

According to Linda Wagner-Martin, “Separated from the thousands of imitative poems is the more recognizable kind of patterning—the echo, a mode in which the writer consciously draws on lines, phrases, imagery from the Plath oeuvre, expecting the material to be recognized. In the dialogue between the later poet and the originating one (here, Plath), the reader is forced to become a participant. Part of the success of the poet who aims for echoes is that the reader is privy to the source of the material.”—Wagner-Martin, “Plath and Contemporary American Poetry,” The Cambridge Companion to Sylvia Plath, ed. Jo Gill, 2006, 56.

Frieda Hughes objects to the appropriation of her mother’s poetry for literary and filmic fictionalization; but then again there’s the question of poets echoing Sylvia Plath’s work. Are they just as politically-incorrect as novelists and movie-makers?

“My mother’s poems cannot be crammed into the mouths of actors in any filmic reinvention of her story in the expectation they can breathe life into her again, any more than literary fictionalization of my mother’s life—as if writing straight fiction would not get the writer enough notice (or any notice at all)—achieves any purpose other than to parody the life she actually lived. Since she died my mother has been dissected, analyzed, reinterpreted, reinvented, fictionalized, and in some cases completely fabricated.”—Frieda Hughes, “Foreword,” Sylvia Plath’s Ariel: The Restored Edition (2004)

According to Jo Gill, “Frieda Hughes has every right to disagree with the ideas of people who attempt to reconstruct Plath ‘through her own interpretations’, but such interpretations are what writers open themselves up to when they put their work in the public domain. Interpretation is what writers seek, even if they, and those who know them, are sometimes made uncomfortable.”—Jo Gill, Modern confessional writing: new critical essays, Routledge, 2006.

Gill continues: “Jacqueline Rose [The Haunting of Sylvia Plath] correctly asserts ‘the right of every reader of Sylvia Plath to form her or his own view of the meanings and significance of her work.”

“Interpretation depends on access to the writer’s work. Frieda Hughes’ new foreword to Ariel seems to read Plath as a confessional writer who hangs her poems on real events. For instance, the foreword tells us that ‘Berck-Plage’ is ‘about the funeral…of a neighbor, Percy Key’, while ‘the couple so wickedly depicted in [“Lesbos”] lived in Cornwall’. ‘Stopped Dead’, we are told, ‘refer[s] to my father’s uncle Walter’.”

“Yet Frieda Hughes is critical of others for proceeding from a similar methodology: “I saw poems such as “Lady Lazarus” and “Daddy” dissected over and over, the moment that my mother wrote them being applied to her whole life…”

“Echoing” is the method of (re)writing used in the above 4 Hughes poems. Ted Hughes used the same echoing method in his Birthday Letters (1998)—such as echoing or mirroring certain Plath poems like “The Rabbit-Catcher.”

This echoing process had lit crit reverberations as well—with Hughes’ prose interpretation contrasting with the Jacqueline Rose's reading of “The Rabbit-Catcher” in her biography The Haunting of Sylvia Plath (1992).

Posted by pugetopolis at 8:28 AM