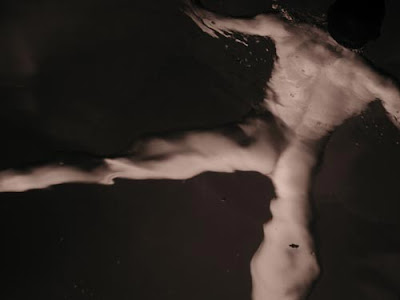 “When the British expatriate filmmaker
James Whale was found dead in his
swimming pool on Amalfi Drive in the
posh Pacific Palisades on May 29, 1957,
the world paid only passing attention.
In Hollywood terms, the director of the
stylish horror films Frankenstein, Bride
of Frankenstein, and The Invisible Man
and the 1936 version of Show Boat
already had been dead for sixteen years.
—Joseph McBride,“The Joys of Necrophilia,”
The New York Review of Books, Volume 46,
Number 12, July 15, 1999

This is me at the bottom of the pool. I’m floating face-down in the shallow end—contemplating my existence. What existence? I’ve been dead for sixteen years anyway—so what’s the difference?
I was the man who tread on the tiger’s tail—a very difficult tight-wire act to be successful at. The censors let me get away with Frankenstein, The Invisible Man and Bride of Frankenstein—but then they said enough was enough.

The studio moguls didn’t want trouble with the Nazis—and I was T=R=O=U=B=L=E wherever I went. Ever since being a POW at Holzminden and Journey’s End—all the way to Remarque’s The Road Back. I had the censors on my back—like Akira Kurosawa.

Kurosawa’s screenplay The Men Who Tread on the Tiger’s Tail was based on an old Kabuki piece “Kanjincho.” (1)

So what finally happened to Tiger’s Tale? For the answer to that question, the censors came onstage once again. When the U.S. Army moved in to occupy Japan, it immediately began crusading against Japanese militarism.

Part of this crusade consisted of dismissing the Japanese censors and the judicial police. And yet Kurosawa was called in by these very same old censors. They said they had objections to Tiger’s Tale. (3)

Well, the censors never give up.

(1) Based on Kanjincho, a Kabuki drama that's said to be as well-known in the East as Robin Hood is in the West, this film is pitched as a parody of Kabuki, meant to undermine the feudal values of the original.”— Jonathan Rosenbaum

(2) In Something Like an Autobiography (1982) Kurosawa wrote: "Yama-san said: 'If you want to become a film director, first write scripts.' I felt he was right, so I applied myself wholeheartedly to scriptwriting." Kurosawa abandoned the idea of an objective narrator in a way which had much similarities with he French nouveau roman of the 1950s. Rashomon was set in the eighth century Japan. The acting is overstated in Kabuki fashion for dramatic effect but at the same time totally believable.

(3) "In any event, this film is meaningless. Just what do you intend by making such a boring movie?" All my pent-up anger broke loose against this fellow: "If a meaningless person says something is meaningless, that's probably proof that it isn't meaningless; and if a boring person says something is boring, that's probably proof that it's interesting." The young censor's face went through changes from blue to red to yellow, covering all three primary colors. I watched this display for a while and then stood up and went home.
Posted by pugetopolis at 12:39 PM