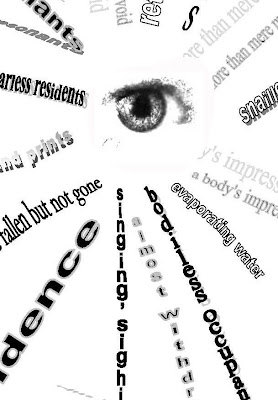 (I like Diana’s above artwork as a possible cover for our anthology—rather than spiral staircase. IMHO it captures “cleaving” very nicely don’t you think?)


“On what basis—do
you determine whether
someone is writing LP?”
—Alfred Corn, poetics@
edited by Joel Kuszai,
New York: Roof Books (1992)

This question—posed by Alfred Corn
on the Poetics List—a part of the
Electronic Poetry Center—epc.buffalo.edu
founded and directed—by Loss Glazier
can be posed—as a possible question
for both language—and cleave poetry.

“On what basis—do you
determine whether someone
is writing Cleave poetry?”

Like Charles Bernstein does—in his essay
“Artifice of Absorption”—in his collection
of LP criticism—Poetics (Harvard, 1992)

1. “I begin to wonder—
whether the big division—
between C poetry & the rest
of poetry—is unfamiliar
methodology really useful?”

Is that actually new—in light of derangement?

There on campus—beneath the Flatirons?

Is any of Wallace Stevens—representational?

2. “On what basis—can you
say that “disjunction” is the difference?

What could be—more disjunctive than Ashbery?

What about the surrealists?

They were into it a long time ago—

5.. Many poets today—fuse 2 techniques. Hejinian’s My Life—autobiography plus narrative? Both representational? What about the cognitive dissonance—the alogical interruptions & transparent narrative?

“Lisa Jarnot’s work is often defined as later generation language poetry, yet she in socially probably more within the East Coast Beat or New York schools. Can possible reading of her book Sea Lyrics is as a bridging of this split between the aesthetic and the social. The book is a single poem composed of composed of long sentences tenth an concerned with liminal states of being and present a narrational “I” whose identification wanders. Sea Lyrics is filled with bridges. Literally, there is a bridge on the cover.” —Juliana Spahr, “spiderwasp or literary criticism,” Telling It Slant: Avant-Garde Poetic of the 1990s, ed. Mark Wallace & Steven Marks, Tuscaloosa: University of Alabama, 2002, 404-428

10. “Sea Lyrics is filled with bridges. Literally, there is a bridge on the cover.”—Juliana Spahr, “spiderwasp or literary criticism,” Telling It Slant: Avant-Garde Poetic of the 1990s, ed. Mark Wallace & Steven Marks, Tuscaloosa: University of Alabama, 2002, 411