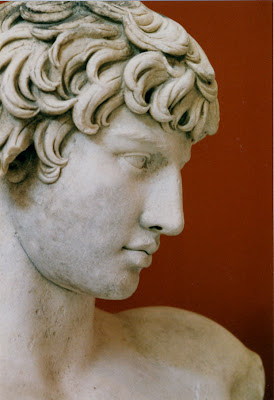 The rain outside was cold—
Nothing’s worse than death.
But my soul was even colder
Because Antinous was dead and
Nude one last time on the couch.

I felt no dread or sorrow—
My eyes were no longer mine.
I was no longer Hadrian the Emperor,
The shadowy light of Death had
Eclipsed everything imperial for me.
My lover was dead and from then on—
The day was always night for me.
My memory of who he was & who I
Was meant nothing to me while
Before there was nothing else but him.
Those hands that once held me—
Those young warm hands now cold
As marble, they were once never cold
For me, always half-diffidently bold!
Now they’re stiff with rigor mortis.
More like a god's likeness now—
His lips whose parting redness I once
Kissed with mine, love's lively art ours,
Our fingers skilled in things exquisite!
His tongue turning my blood cold!

These things are things gone now—
An emperor’s handsome kept boy,
Silent rain and a sullen Emperor,
Sunk by a couch, my grief like
Spilled wine from a broken vase.

The gods take away everything—
Even a Roman Emperor weeps.
I wept and knew that every future
Age was a forgetful stage, unborn
Eyes wouldn’t weep for me.
Antinous was dead, dead forever—
Venus herself, once Adonis' lover,
Seeing him once alive, now dead,
Wept her old grief's tears for me for
She too knew inconsolable loss.
His hands behind his head no more—
Linked together in that pose that made
him a teenage Apollo, his nipples pink
And erect, heart-throb & veiny stomach,
Love's demanding bellybutton of Love.

The rain fell and he lied there—
Forgetting all my gestures of love.
All his arts and toys were now Death’s,
Inhuman coldness no heat could revive,
These ashes no flames could burn again.
O Hadrian, what will my life be like?
What boots & lords & men & might
Can dispel his absence in my visible
Empire’s glory, when thoughts of him
Come to me alone here at night?

Nor will there be hope of life again—
In the morning for widowed love & kisses,
Now that I’m robbed of each new day,
His lips with no other purpose other than
The joy of his forgotten young smile?
My vague hands no longer grope Olympus—
My fingers droop by my side without joy,
To hear the rain on the temple roof
Ceases to lift my head, his raised glance
From the pool my lovely bathing boy.
Naked he laid on the imperial couch—
I couldn’t help myself feeling him up one
Last time, my hands and cloying lips
Trembling, he was so pale & uncovered,
All my senses bleeding out of me…
His ephebe beauty I knew so well—
My hands and mouth knew him better
Than even he knew himself, each new
Straining lust turning and toying with
His nervous fainting blushing flesh.

Empires trembled and fell when—
Back into the cushions his face with
Eyes tightly closed, pressed into the
Silk gold-braided pillows, forcefully
Enough to hush the jealous gods.
Antinous was my love & melancholy—
Rome the city that made my love captive,
An Emperor down on his knees before him,
Slowly satisfying my imperial ways,
If only the Senate saw my sacrilege.

But now the Nile gave him up—
Eternal Nile rinsing his wet locks,
Death's blue Danube wrapped curls,
Around his forehead & neck, one whose
Smile was my only reason for existence.

Even as I knew his love was no more—
I tred to revive it by taking his hand,
Trying to feel his pulse awaken again,
Becoming what it was once like, his
Dead body on the couch resurrected.

And giving me once again his love—
And coming to lie with me, close, closer,
And closer still, a creeping love-wise kind
Of invisible love, all his body-orifices,
Entrances for my lust, profane caresses.

Enough to bleed his last dead nerve—
O sweet and cruel Parthian fugitive!
So that he rises up, looking for his lover,
Loving me again, from where none can know,
Vaguely half-feeling what none can feel.
I ran my cold lips all over his body—
So ice-senseless my lips that they grew
Colder than death, colder than his dead
Young nude body, stretched on the couch,
Making it seem both of us were dead…

Living both together once again—
At least for one last convulsing moment,
For love is surely the presence and mover,
That makes the gods shudder, forever
Conjoining themselves in death’s cold sloth.
There was a knowing wanting—
The gods moving like a mist between me
And Antinous, even as my finger-tips idly
Searched his body, surely there was some
Fleshly-response even in dark dead Dis?
The love-question wasn’t understood—
The god was undead whose cult was mine.
I put my hand where heaven should be and
Cried to the mute gods to know my pain,
But their calm faces turned away from me.
”O granting powers! I will yield up my reign—
In the still deserts let me lonely nomad roam,
Let me be barbarous beggar and slave, just
Give me his arms again, my Antinous lover,
Kept Boy of Empire, my Mediterranean man!”

“My sweet Ganymede who Jove loves—
Olympic cup running over with joy like mine,
This boy and his white body and golden hair!
That he should be mine, out of jealous sight,
His beauty stealing breath from all who see!”
Thus hours slid by like tangled curls—
Moments slipped by like falling autumn leaves,
Arms tightened & twisted, strong as iron bands,
Lips curled around golden cups, slowly sipping
The nectar of the gods, his eyes closed tightly.

I knew the continuing frenzy of love—
Undoing me with the subtle arts of Feather
First and then Whip, the love barbarians live
As a religion in far off Britannia, offering to
Savage gods, tattooing themselves for men.

Sometimes I adorned him in drag—
Making him dress in half-vestures,
Then disrobing him in statuesque nudity,
Imitating some god that seemed to be
Marble's well-endowed virtue in men's eyes.

Sometimes he was pale virgin Venus—
Aphrodite rising white out of the sea,
Cherubs and angels blowing trumpets,
Sometimes as Apollo, young and chicken,
Mocking Jove in mock judgment of love.

The presence at his feet his slave lover—
How I enjoyed acting out that rite, in
Ever-repositioned mysteries, something
Anyone can be, O stark negation of the
Things that are, to be what can be.
O golden-haired moon-cold boy—
Loveliness so cold! So cold! His love like
Vichyssoise—best served cold, as cold as
Love can be thru memory, his love like a
Labyrinth, his young cold male beauty.

Even now he calls my name in death—
And bids me come, smiling his cool smile,
Calling from the icy River Styx, cold heart
Swollen like some coagulated Tiber, mocking
Me one last time in the shadows of love.
The rain again in the palace courtyard—
Like a vague pain rising up inside me, the
Sense of wetness in the night air, and then
Suddenly I was an Emperor again, sitting in
A room and all in it so far away from me.

I saw the couch, Antinous, my own body—
Leaning down over the boy, getting
A clearer sense of myself, and saying
Those unutterable words, I was Emperor
And could make love to him if I wanted too…

To save your soul's dread—
I won’t talk about the thousand statues I
Gave to the Roman Empire as evidence
Of my love for Antinous and the obscene
Sense that male beauty oozes divinity.
Antinous’ subtle artistry made—
My life and Empire seem real, a nude
Bithynian youth, from the provinces in the
Northwest of Asia Minor by the Propontis,
This Thracian Bosporus boy…

Inevitably the statues I had built—
Got buried in the dirt of the Acropolis,
In dim ruins until some were unearthed
And revealed, changing nothing, except
In the eye of jaundiced archeologists.

History overtook Antinous & me—
Even the gods themselves forgot us,
Down into darkness we went, a dozen
Broken Antinous statues, the Dark Ages
Looming over gone Roman victories.
Envious hearts might be jealous—
Not being contemporary with my love,
But love and death happen to all of us,
Even Emperors can feel the vast sullen
Emptiness congealing around us.

I bowed my head into his arms—
On the low couch, closing my eyes, not
Seeing the naked floor, dark, cold, sad
And unknowing, my hurting breath was all
I knew, my sense of not knowing.
Out of the falling darkness came—
Something down through the courts below,
Letting an Emperor sleep, and I slept,
The gods coming now, bearing something
Away, on unseen arms of power & repose.

Antinous gave me a higher love—
A flash-love raging for young male beauty,
I trusted my imperial fate, that the high gods
Made me Emperor not to annul life but to
Promote more imaginative heteronyms.