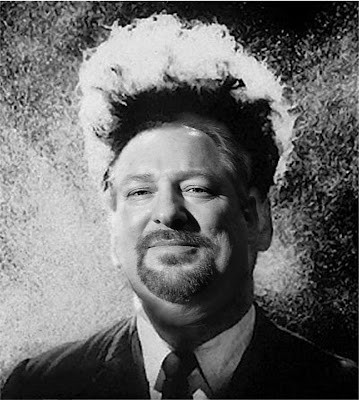 David Lynch Made a Man Out of Me
A critic comes of age as Eraserhead just gets better with time
by Nathan Lee, The Village Voice, January 16th, 2007 2:24 PM

Like every touchstone of my nascent cinephilia, I first encountered Eraserhead on crap VHS. It was the late 1980s, I was 15, and I didn't know what I'd seen, but it was love at first sight. Nerds in space. Mutant babies. Domestic derangement. Radiator ladies. Inexplicable seizures. Enigmatic orifices. Weird routines. The hardcore bizarre and ineffably beautiful. Totally. Like. Awesome. David Lynch became an instant culture hero. I all but draped myself in Blue Velvet (movie, soundtrack, poster) and was soon hosting Twin Peaks geekfests indulgently catered with cherry pie and strong black coffee. Along with Heathers, the Pixies, shoplifting Marlboros, and hatred of Orange County, Lynchian surrealism played a major role in defining my suburban artfag weltanschauung.
Hand in glove, my brain with Eraserhead. Even more than Blue Velvet, Lynch's non-narrative nightmare scratched an itch in my imagination. Here were my two favorite genres, horror and science fiction, spied through a murky crevice of the underground, a perv-o-licious perspective that forever altered my taste in movies. Out of similar fissures, the philosophic horror shows of David Cronenberg would strike deeper and sustain me longer, and I would come to find Lynch's Hollywood Hallucination mode his richest ( Lost Highway, Mulholland Drive, Inland Empire). But Eraserhead came first, its swarming spermatozoa impregnating a love of the avant-garde that rapidly metastasized.
Some years later in San Francisco (still smoking but now into Stan Brakhage, Sleater Kinney, and moving to New York), I returned to Lynch's debut rather reluctantly, as you might pick up a writer beloved in adolescence and now suspected of irrelevance—hello, Hermann Hesse. A new print was booked at the Castro Theatre, drag-queen mothership of Bay Area cinephila, a movie palace in the old style, or at least what a degenerate film nerd like me imagined that to be: frescoed walls, red velvet curtains, chandeliers, uncomfortable seats.
I remember one thing only of my reunion with Eraserhead: the discovery that to see the film means nothing—one must also hear it. Viewing it alone in the dark in my bedroom, its aphonic oddities may have been diminished on TV, but they well enough amazed. Watched on an appliance, it sounded like one: a refrigerator on the fritz perhaps, or a vacuum cleaner stuck in the bathroom. In the larger reaches of a grand old space, bounding off marble and chandelier, the soundscape of Eraserhead opened a vast new dimension. Choose your onomatopoeia: clang, drone, hiss, buzz, squawk, howl, khzzsh-shzz- frphft. All of which echoed as if housed in an intergalactic seashell cocked to the ears of an acid-tripping gargantua.
(Speaking of which: "Eraserhead's not a movie I would drop acid for," wrote J. Hoberman in his very first assignment for the Voice, "although I would consider it a revolutionary act if someone dropped a reel of it into the middle of Star Wars." Was Tyler Durden reading?)
New York, 2007: Committed to smoking, bored with rock, into Inland Empire, and dreaming of expatriation, I preview the restoration of Eraserhead at the Museum of Modern Art. At the ungodly hour of 10 a.m. And for what? A chance to play the auteur game, for starters, dutifully noting the first appearance of motifs from Inland Empire, parallels with the production design of Blue Velvet, etc., and . . . yawn. Some new observations. The debt to silent comedy. And perhaps a Cocteau influence? Eraserhead feels steeped in Blood of a Poet.
One thing is clear on third viewing: the genius of Eraserhead as sculpture. What a masterpiece of texture, a feat of artisanal attention, an ingenious assemblage of damp, dust, rock, wood, hair, flesh, metal, ooze. The immaculate restoration brings all this to new light. It doesn't deliver a visual revelation on par with the aural adventure in San Francisco (although the rumbling of the subway beneath MOMA's Titus 1 makes for a fantastic effect), but it well enough amazes. I'm captivated by floral wallpaper, plastic flowers, rose-patterned drapes, twists of dead tendrils, and especially that dry mound of earth by the bedside from which sprouts a dead twig, and which resembles something you'd see installed at Matthew Marks. This dense, consistent iconography keys to the overall parody of natural process, and calls for further analysis.

Posted by pugetopolis at 2:41 PM