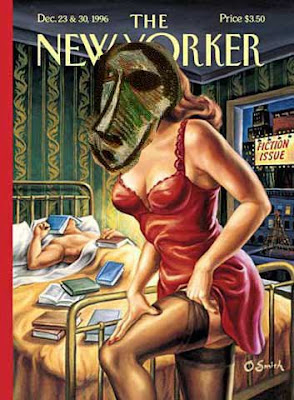 “the endless variations
of being boring…”
—Poetry Snark

“the endless variations
of being snarky…”
—Snarkmeister

What is the stamp of snark?

Is it more than just being bored?

Is it more than just sucking eggs…

A Lie that tells the Truth?

Is there a Snark Sensibility?

Is there such a thing as faux-snark?

Somebody who fakes snark?

Is snarkery sincere or flippant?

Is Spencer Reece snarky or faux-nark?

Is Alice Quinn faking it?

I ask myself these snarky questions.

According to PoetrySnark, Spencer’s trim look, his shiny black shoes, his canary voice, his ass-worshipping attitude towards James Merrill and his urban mall white trash poetics make him “faux-snark.”

Are these worthy of the altar of snark?

On the other hand, if Reece perhaps had only sucked something else besides eggs—then maybe his poetry would be more authentically snarky?

For example, take this snippet from The Clerk’s Tale:

"outside it was summerthe sky endless a glassed-off beautiful Bermuda bluethe day was a sea I could no longer swim in…."
—from "United Hospital,"

Doesn’t sound very authentic or snarky to me. Here’s a more snarky version perhaps—something more perverse and transgressive about what Bishop was talking about:

“outside it was summer
I was sitting in my chasses-lounge
having snarky thoughts about this & that—
mostly about snarky south of the border
stuff like my Abercrombie & Fitch shorts,and my old skanky Bermuda Triangle
down there full of smarmy memories,
used rubbers & scudding flotsam…
the kind of jetsam & junk tourists
dump overboard year after year
cruising around in their
crummy cruise ships…”

Doesn’t that sound more authentic than Reese’s “oh I just couldn’t swim in that “dark shit!!!”
The New Yorker gushes about Spencer’s poetry—comparing it to Elizabeth Bishop: "What one seems to want in art, in experiencing it, is the same thing that is necessary for its creation, a self-forgetful, perfectly useless concentration."

The problem I have is that Reece doesn’t flounder enough in the “stink of his sexuality,” his tailored banality needs much more snarky attention and concentration that he wants to give it. Snarky poets hardly can ill-afford being forgetful of themselves in this snarky dog-eat-dog world—or they’ll end up snarkbait or worse.

How to be snarky about yourself—and yet distance yourself from the Snarkosphere all about you? How to write poetry—without succumbing to faux-snarkery and deluding oneself?

“After my mother and father fight, my father takes my hand and we walk down to the Mississippi where he smokes Camel cigarettes. He flicks his ashes away from me. He rarely says my name. All day on TV, I watch monks in Saigon douse themselves in gasoline and light their saffron robes on fire. When they ignite, they do not cry out. I study their silence to comprehend how a tongue turns into flame.”

“After my lover and I fight, he laughs at me and we walk down to the Mississippi where he smokes Camel cigarettes. He flicks his ashes in my face. He calls me dirty names. All day long in front of the TV, he’s a couch potato. When he gets off, he doesn’t say anything. I study his silence to comprehend how heterosexuals think.”


The difference between Reese’s prose-poem and mine is simple. My version of “Homosexuality” puts snark back in the driver’s seat where it belongs.

All of these Styles of Snark—dovetail into a more lush, more lavender, more mid-mauve, more saccharine, more honeyed, more Sebastian-esque Artform for us poets.

The Artform of Snark—has many styles and canonical alternates. Opening up—the Snarkosphere.

Posted by pugetopolis at 2:24 PM